The Science of Disappearing

Ever since ancient Greece, man has been enticed with the idea of being invisible. Our stories offer different paths to achieve this invisibility – for example, Plato’s shepherd became the King of Lydia with the help of a ring which makes the wearer invisible, and H.G. Wells’ The Invisible man becomes so by drinking a formula he invents.

The popularity of Harry Potter, however, has caused this power to take the form of a cloak in our imaginations. How simple it would be to cover ourselves with a piece of cloth that makes us invisible! Every time you are put in the spotlight against your wishes, made to answer an awkward question or want to be undisturbed, you just slip a cloak over yourself and you’re invisible!

Now our governments are apparently willing to spend money on making this crazy dream come true. Different research groups around the world have come up with different ideas to make this a reality. Though they are all in incipient stages, there seems to be a lot of potential in these ideas. Now we look at a few of these brilliantly crazy ideas.

Optical camouflage is probably the simplest of the ideas. You would have a computer projecting the image behind you onto a special cloak you wear.

In its present stage, this cloak would require you to carry around a camera, a computer, a projector and a two-way mirror (a.k.a. beam splitter). You would place the camera directly behind you to capture the scenery behind and send it to the projector which would project it on the mirror. The mirror would, in turn, shine the image on your cloak.

Diagrammatic representation of how the scene behind the person is captured using a camera and projected on him/her. (Photo credit: Tachi lab)

Now before you write this off as being too easy, try doing it at home. You will not get the desired effect, because the dress you’re wearing will reflect the light in all the wrong directions. This cloak is specially designed to reflect the light in the same angle it hits the cloak, causing this:

Researcher donning a specially made cloak which reflects light projected on him in a way which causes him to become (nearly) invisible.

We probably will not be able to achieve complete invisibility using this method, since there will always be a camera and projector in the way. Instead, researchers from the University of Texas at Dallas have come up with a way to manipulate a common phenomenon to achieve invisibility.

On a hot summer day, when you’re driving down the road, you sometimes see a “puddle” appear on the road in front of you. When you drive closer the puddle disappears. The reason for this is the road gets really hot in summer and causes the air around it to become hot as well. Now when light travels from cold air to hot air, it causes the light to bend. The light from the sky is bent by this hot air towards our eyes and we end up seeing a poor reflection of the sky on the road and think is water.

The researchers from UT Dallas decided to use this effect and a bunch of carbon nanotubes (a sheet of carbon wrapped up to form a tube) to form a “cloak.” They heat up the carbon nanotubes and this causes the air around it to heat up. As with the road, the hot air bends the light so you can see what is behind the tubes.

The nanotubes are heated which causes the air around to heat up and disperse the light so the nanotubes disappear.

Sadly, at present, this effect can only be replicated underwater, at a very small scale and at certain angles. Meanwhile, though there are researchers around the world who are working on what they think might be an easier path: special materials which bend light differently.

When we put a pencil in a fishbowl or a glass of water, it looks bent and crooked. This is because while the light in the room reflects off your pencil and travels up to your eyes, it passes through air, water and glass. When light travels from one substance to another, it bends which is why you see your pencil bent.  Groups in Duke University, University of Maryland and Nanyang Technological University (NTU) Singapore, among others, are working on creating a material which will bend the light around an object rendering it invisible. 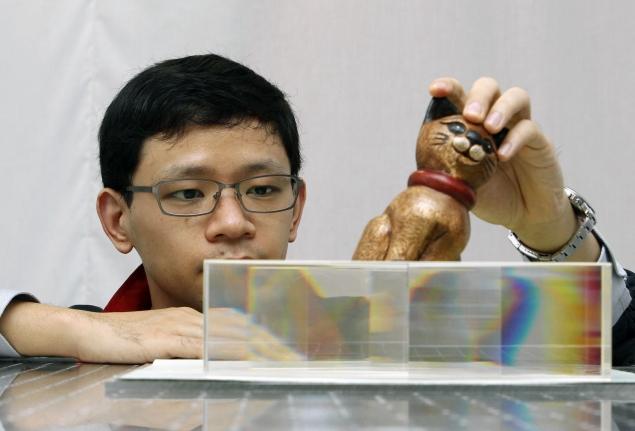 Researcher in NTU demonstrating how materials could be used to bend light and cause the object behind to become invisible. (Photo credit: Reuters)

However, these metamaterials are currently confined to particular wavelengths and angles of viewing.

Apart from sneaking around school grounds after curfew, these technologies which bend waves have other real-life life applications as well.  For example, earthquakes are caused by waves called seismic waves. We could potentially bend these seismic waves around a populated area (making it more earthquake proof!) even if we’re restricted to a single wavelength. Invisibility cloaks could also be used as camouflage in covert operations or as protection against radiation for those working in/near nuclear reactors.

Arthur C. Clark famously said, “Any sufficiently advanced technology is indistinguishable from magic.” What seemed like magic even five years ago seems within our grasp now.