One of the more popular “Did you know?” facts these days seems to be “Did you know Einstein said that if the honey bee disappears from the surface of the earth, man would have no more than four years to live?” Though honeybees do play a major part in pollinating our crops, I had a hard time believing this claim. For one thing, humans have a tendency to come up with very innovative solutions to seemingly deadly problems. More importantly, though, the quote was attributed to Albert Einstein – and surely we know better than to trust those! So, I decided to investigate. 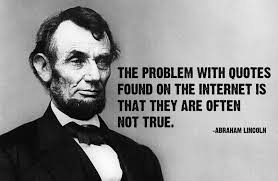 It turns out that the popularity of this statement is due to the fact that in the last 50 years, the honeybee population has declined by about 50%. This decline came to public notice and started causing concern around the 1970s and 1980s, when across Europe and North America, the honeybee population suddenly plummeted. The dip was caused by Verroa mites – small parasites that lay their eggs inside a honeybee pupa (the stage when insects are transforming into adults). Once the young mites hatch, they feed on the immature honeybee, causing the honeybees which emerge out of the infested pupae to be noticeably smaller. Their lifespan is also significantly reduced, and most infested colonies die within a year or two unless treated.

Life-cycle of a honeybee

These days, though the Verroa mites still cause beekeepers a lot of sleepless nights, they can be kept under control with the help of a pesticide called fluvalinate and by breeding mite-resistant honeybees.

Just as it seemed like we had a solution for that problem, though,the bee population took another turn for the worse. In 2005, the bees began to disappear without explanation – there was a sudden and complete absence of adult honeybees in colonies. What made it especially mysterious was that almost no honeybees carcasses were found in or near the hives.

The people who were worst hit by this plague were the bee farmers who lend their bees to orchards and fields where they pollinate the crops. The farmers found that every time they visited a farm adjacent to a corn field, they lost a large percentage of their hives – and the ones that survived became much weaker. The situation got so bad that now – for a few months every year – these farmers cart their bee hives across the country to give the bees a ‘vacation’ and let them recuperate. After their little holiday, the bees are carted back to their original location, where they go back to pollinating crops, and dying. Bee farmers have even resorted to splitting their hives into smaller ones in order to increase the bee population in the long run. Increasing the number of hives increases the number of queen bees, which increases the population – but since you can’t extract honey until the smaller hives grow large enough, this results in further losses for the farmers. 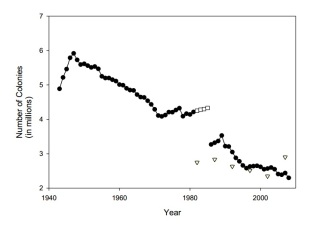 The number of bee colonies have gone down drastically in the last 60 years.

Initially, the cause of this sudden and mysterious disappearance (popularly called Colony Collapse Disorder) was unknown. A wide range of theories, including malnutrition, pathogens, mites, fungi, pesticides, and destructive beekeeping practices, were suggested as explanations.

Finally, in 2008, an Italian biologist named Marco Lodesani conducted a number of autopsies on bee carcasses which lead him to suspect pesticides linked to maize seeds. Since maize seeds are coated with a class of pesticides known as neonicotinoids before being sold, the researchers convinced the Italian government to ban certain neonicotinoid pesticides. Since their ban, there has been a notable decrease in honeybee deaths. Several studies in 2012 confirmed the neonicotinoid hypothesis: they showed how these pesticides interfere with the honeybees’ ability to find their way home, causing the bees to get lost and die far from their hives.

In view of such indisputable evidence, Europe declared that three neonicotinoid pesticides are dangerous for honeybees and passed a two-year ban on them. The United States has yet to follow suit, but if there is a universal ban on neonicotinoids, we might be able to reduce our bee deaths and continue using honeybees to pollinate our crops.

The crops which require bees to pollinate them. If you see any of your favorite food here, I’m afraid we have some bad news for you.

But what if our efforts prove futile? What if  neonicotinoids aren’t banned in the US or is banned too late (which is quite possible) and all our honeybees go extinct? Will humans follow suit?

To understand this, we need to look at the various ways our crops are pollinated. A large number of our crops and produce are pollinated by honeybees. For some of these crops, including cocoa, watermelon, etc., honeybees are essential, while others are helped by honeybees but can also undergo pollination through wind, other insects, birds, and even humans.

Recently, Whole Foods staged a dramatic demonstration of how many of our crops are pollinated by bees: to raise public awareness about the decline in the honeybee population, they removed all products pollinated by honeybees from their shelves. Among the products removed were apples, avocado, mangos, onions, carrots, lemons and many more fruits and vegetables we eat every day.

Whole foods removed all the products pollinated by honeybees from their shelves to demonstrate what a world without honeybees would look like.

Shocking as this picture is, and despite how integrated honeybees seem to be with our food and lifestyle today, honeybees aren’t native to North America. Before the honeybees migrated to the continent in the 1600s along with European colonists, Native Americans ate a rather healthy diet of corn, squash, sunflower seeds, beans, and, of course, turkeys. There are other crops which are not pollinated by bees at all – tomato and oranges self-pollinate, while crops such as corn and pecans are pollinated by wind. In fact, honeybees actually hinder the growth of some vegetables such as squash and cauliflower.

When sailors first landed in Mauritius in the 1500s, their main source of protein was the dodo bird. However, after hunting the dodo to extinction, they managed to find alternate sources of food. In fact, their lifestyle changed so subtly that at first they did not even notice that there were no more dodos around.

Similarly, in a time when we are able grow burgers in a test tube, we would probably not be much more aware of the extinction of honeybees than the European colonist were of the dodo’s absence. While we might experience some discomfort and a change in our food and lifestyle, the human race would, sadly, survive. Albeit, without chocolates.