A Case About Probiotics

Erin Andrews is sold on probiotics. Are you?

Erin Andrews is trying to sell me probiotics.1 She is walking through a bustling gym wearing a sharp blazer and a fresh blow out. Male patrons gawk. She bubbles that the euphoric powers of probiotics can improve digestion and immunity. She takes probiotics, and she has grown tall, healthy, and has a sweet gig interviewing football players. And now every gym member is clamoring to get a slice of that probiotic pie.

* It may be surprising, but not all yogurts contain probiotics. Probiotics are often added to yogurt before packaging, and then marketed accordingly. So that cup of Activia has been doused with cultured bacteria, that tube of go-gurt remains probiotic-free.

Probiotics are advertised as “healthy bacteria”, that, once consumed and introduced in your stomach, bring harmony to an otherwise tumultuous state amongst the native ruffians (microbial community) inhabiting the depths of your gut.2 They are often supplemented in packaged food that proudly blazes the promotion “live active cultures.”* The Probiotics can now be delivered to your gut-inferno as a tasty drink, a creamy yogurt, or a convenient pill. 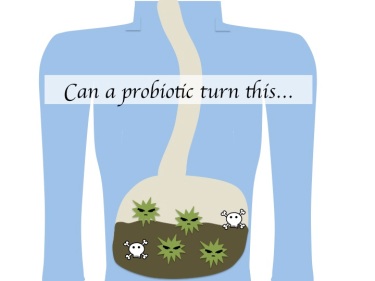 The busted bubble of environmental microbiologists

In the 1970’s-1980’s, environmental microbiologists were on cloud nine. Scientists could genetically manipulate bacteria to do anything. And they had finally cultured bacteria to breakdown petroleum-based liquids. Make bacteria breakdown our garbage, of course! Imagine an oil spill, potentially drifting toward a beach filled with sunning baby seals. A simple dousing of the oil spoil with these miracle bacteria, and the bacteria will munch down the spill to nothing; the baby seals can continue to live a full and vibrant life. While this seemed but a scientific dream, researchers were salivating over the idea of engineering bacteria to remediate a variety of our pollution needs.

Lawyers were salivating too. These environmental microbiologists were thinking of genetically engineering bacteria and releasing them in the environment? These bacteria could go wild, and take over entire ecosystems, becoming stronger as they swarm our natural environments. Think of the lawsuits, think of the regulations!

But, alas, the appetites of neither the environmental microbiologists nor the litigators would be fed. Once these plump, petroleum-degrading bacteria were released in the environment, the bacteria did the most disappointing thing possible: they died.

A fish out of water

The scientific reason for the disappointment was obvious, and environmental microbiologists could only slap their hands to their foreheads. Bacteria already native to the natural environment had been there for thousands of generations. They knew how to handle themselves in the microbial hood. They grew to be strong; these tough natives could handle the harsh conditions on the home-front better than any foreign organism. And yet, environmental microbiologists tried to culture bacteria in a cushy laboratory, and then introduce it as the new boss? Not up in here!

This phenomenon is easily understood in the animal kingdom. Consider the majestic lion. This lion can withstand the dry, hot summers of Africa. Its legs are fast to catch the fleeing gazelle. And its jaws are strong to snap through the body of its enemies and prey. Now imagine relocating that majestic lion to the Arctic Circle. The lion now becomes polar bear food. 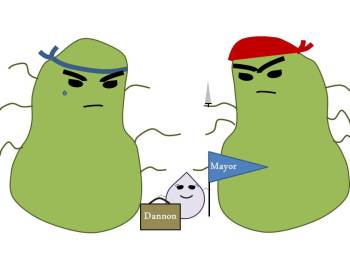 It’s a jungle out there, and the human gut is no different. Swallowing probiotics and hoping for harmony in your stomach is the same naïve thinking of the environmental microbiologists of the 1980’s. Your natural gut bacteria have been there for generations, and have no problem bullying any new-comers that has a soft upbringing in a Dannon food laboratory. Some of these spoiled bacteria don’t even survive past the colon.3 And while some bacterial strains (such as some types of Lactobacillus) do survive the harsh journey to the gut, they must now complete their mission past enemy lines. Whether probiotics are hardy enough to make it to the gut and compete with the native bacteria competition is still argued; thus probiotics have not yet earned FDA approval.

Like environmental microbiologists, probiotic scientists might have cultured a bacterial dream team that only survives in their cushy lab. The fact is, most probiotics is gut bacteria food.

** This is why there is wide-spread success with (gulp) fecal transplants.

While the lab-based bacteria normally have a tough time competing with the big bad natives in your gut, there is a time when the probiotics thrive: when the native bacteria have been wiped out. The natives can be wiped out through a dosing of antibiotics, or food poisoning (roadside sushi, what was I thinking). In this case, probiotics can replenish an empty gut ecosystem, while you wait for the natives to return to a natural order.**

***Likewise, environmental microbiologists are now trying to change the conditions of nature to promote the growth of the desired bacteria. There is actually scientific reasoning behind dumping iron in the middle of the ocean, or pumping molasses underground.

And for those who swear by probiotics, the sudden improvement in your digestive system may not be an illusion. Probiotics are now accompanied with prebiotics, which is food for the healthy bacteria in your gut.*** This serving of prebiotic may feed both the lab-supplemented probiotic, as well as the healthy bacteria already native to your belly. So that happy feeling after a heaping spoonful of probiotic yogurt may have been due to the actual yogurt itself.

Of course, commercial scientists are on the lookout for the white unicorn: a probiotic that can be cultured in the lab, swirled in your food, and thrive in your gut, outcompeting all the less desired, native gut bacteria. Whether you want a foreign, lab grown bacteria to bully you native gut bacteria in your stomach is up to you.

But, if anyone wants to join me in opening a clinic that could care less about swallowing probiotics, but focuses on promoting growth of healthy natives by changing the stomach conditions, call me. I think we could make a lot of money.

One thought on “A Case About Probiotics”