The Mysterious Death of the Dinosaurs

Remember when you first learned about the land of the dinosaurs? For me, it was the Disney movie Fantasia that first introduced this wondrous prehistoric world. Huge beasts roamed the earth, squashing ferns the size of full-grown trees. These kings of the earth ruled millions of years ago. Suddenly, there’s a terrible flash of light as an asteroid crashes on to the surface, wiping dinosaurs off the face of the Earth. How wondrous. How terrifying.

To this day, most children are taught about the asteroid that killed these magnificent creatures called dinosaurs. This single asteroid event is still studied by top scientists, and we can now hypothesize specifics of this event, such as the date (66.24 Million years ago), temperature of the earth after the collision (20,000 degrees Celsius!) and what the dinosaurs would see right before the collision (literally a black gaping hole in the sky).1 It’s pretty much understood that this asteroid was what caused the extinction of dinosaurs, right?

The proof of the asteroid 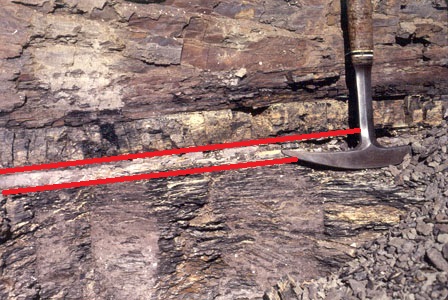 Proof of a colossal asteroid crash is buried in this seemingly mundane rock. The K-Pg boundary is between the red lines. Image from wikepedia.com

Scientists have a strong case against the asteroid as the murderer of Earth’s dinosaurs. The biggest clue begins with a thin, grey layer of rock.* This layer is so non-descript, it would go unnoticed on a normal day hike. In fact, it is often only a couple millimeters thick, and is sandwiched between two layers of equally nondescript dark brown rock.

*This layer of rock is referred to as the K-Pg boundary, artist formerly known as the K-T boundary. A fairly practical (but mundane) name, as the K stands for Cretaceous Period and Pg stands for Paleogene Period. So K-Pg marks the end of the Cretaceous and the beginning of Paleogene geologically.

But this thin layer of rock has one special feature: ubiquity. You will find this grey layer in America, Africa, Europe, anywhere in the world. More interesting, this grey rock layer appears to have been formed at roughly the same time across the entire earth. Scientists studied the grey layer, and realized it contains an abnormally high concentration of iridium, an element scarce on the Earth’s crust, but abundant in comets and asteroids. So, scientists logically deduced, 1) a huge asteroid struck the earth, 2) it blasted pieces of earth and the asteroid into dust, 3) this earth/asteroid dust shot up into the atmosphere, and 4) this dust rained down and distributed itself across the earth. The asteroid that struck the Earth and created this much dust would have to be of astronomical size, and would surely kill huge populations of living creatures. Later, when a large crater in Yucatan, Mexico, now called the Chicxulub crater, 110 miles in diameter, was found to have been made at roughly the same time as the dinosaurs’ extinction, the case appeared to be closed. Victim: dinosaurs, killer: asteroid.

But is the case closed?

Here is a fact that you may not know, unless you have taken an intro geology course: the dinosaurs appeared to have already been extinct well before the thin, grey, rock layer was ever laid down. To be exact, most dinosaur bones are found 3 meters below this thin rock layer. On the geological timeline, that means the dinosaurs went extinct 100,000 years before the asteroid hit.2

This does not mean that this asteroid did not cause a mass extinction of ancient creatures on Earth. There are thousand of other creatures that appear to have been alive and kicking right up to the showering of grey rock. However, these are fossils of snail and bug-like creatures, and other prehistoric plants and animals, not of those huge lumbering dinosaurs.

So what killed the dinosaurs? Unfortunately, the verdict is still out, but there is a highly competitive forerunner in alternate theories.

This alternative crime scene starts with volcanoes. Experts are certain that volcanic activity was extremely high during the last few ages of the dinosaurs, with eruptions beginning about 250,000 years before the asteroid struck, and continuing for 500,000 years.3 The ash from these volcanoes caused an array of atmospheric hazards, such as blocked sunlight, extreme rise of greenhouse gases, and acid rain. Changes in precipitation, air quality, and temperature would first kill the vegetation, which would then hurt the herbivores, thus decreasing the carnivores’ food source. This trickle down effect of extreme climate change whittled away at the overall dinosaur population.4

Some scientists believe the dinosaurs could not cope with this extreme climate change. Others believe climate change caused a drastic population reduction with just a few dinosaur species managing to eke by – that is, they were barely surviving right up until that asteroid collided into the Earth, which just hit the extinction nail on the head.5**

** There are some dinosaur ancestors that are thought to have made it out alive. These dinosaurs eventually evolved into the birds that we see and hear today.6 Hopefully this motivates you to re-watch Jurassic Park.

Yet some scientists still feel asteroids are to blame. A few have adjusted their theory to a bombardment of many asteroids. And the resolute remain convinced a single gigantic asteroid wiped them clean. These researchers have set out on a mission to find dinosaur bones closer to the grey ash line, and they have successfully found a couple of dinosaur bones that are within 60 centimeters of it.7 They claim this “closing of the 3 meter gap” will once and for all put the debate to rest.

But, alas, a couple of dinosaur bones do not equal an entire prehistoric population. The bones could have been previously unearthed from below, and moved closer to the grey layer by natural geologic processes.

And so the true killer of the dinosaurs is still debated by the paleo-geeks of today. But the colossal asteroid as a villain unarguable makes the most dramatic ending to all those childhood movies.

One thought on “The Mysterious Death of the Dinosaurs”