Finding My Calling At The End Of The World

A worker checks on the repairs to the Large Hadron Collider following the Quench Incident.

Back in November 2009, the physicists, engineers and technicians at the  state of the art CERN facility worked diligently to uncover the secrets of our Universe.  Their work on a series of twenty-one million dollars in repairs to the Large Hadron Collider (LHC) following an operating was coming to an end.  They were days away from restarting the particle accelerator when more than 100 terrorists took over the laboratory deep beneath the Alps on the border between France and Switzerland.  The terrorists held more than the facilities, scientists and technicians hostage – they threatened the entire world.  If their demands weren’t met, terrorists would turn on the LHC and create black holes that could destroy the Earth.  The United Nations Security Council quickly tabled its debate over child soldiers and pondered its response to this existential threat.  Fighting the insanity gripping the Council and the terror washing over the world stood an unlikely hero – the delegate to the Security Council from the Republic of Uganda.

If none of this sounds familiar that’s familiar that’s alright, because it never happened.  It wasn’t even the plot of a terrible B-movie taking advantage of the very real paranoia surrounding the Large Hadron Collider (that movie was about zombies).  Instead, it took place at a collegiate Model United Nations conference.  As my college’s Undersecretary General, I had been selected to represent us (and the Republic of Uganda) on the most exclusive and respected body at the conference, the Security Council.  The conference takes place over three days, and on the second day the most interesting event of the entire conference happens – the crisis.  The crisis our year was the hostage situation at CERN and the terrorists’ threat to destroy the world.  But this threat wasn’t the real threat to society; the real threat was individuals in power making decisions while fundamentally misunderstanding the science.  That’s the threat I felt compelled to push back against.

When a crisis at a model United Nations happens, Security Council delegates are quickly charged with assessing the situation and drafting a resolution in response.  As the only one in the room with a technical background, I recognized that CERN was not capable of producing a black hole that could engulf the Earth.  No credible scientist was concerned with this possibility.  Independent review panels found safeguards in place sufficient to prevent a catastrophe.  Any black hole that would be created would have the mass of a proton and quickly extinguish itself.  In short, the terrorists’ threat to turn on the Collider was an empty threat that would have no impact on the continued existence of our planet.

With the evidence and scientific consensus behind me, I persuaded the rest of the council that the threat wasn’t the LHC. Our response instead ended up offering support to France and Switzerland to rescue the hostages.  After we resolved the issue, the Security Council President, a law student who had planned out the crisis, broke character and called for a pause in the session so he could discuss the outcome. 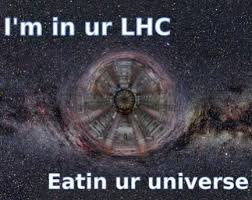 Instead of commending us for not giving into the paranoia and misinformation surrounding the LHC, he chided the Council (and me in particular) for not giving the threat of world annihilation credibility.  He lectured us that as a law student, he had been exposed to a principle that we had not: the precautionary principle.  The principle holds that when an option has an unknown probability of catastrophic failure, no matter how small the probability is, it is always better to not choose that option until more is known.  He argued there was a nonzero probability that the Collider would create a black hole capable of consuming the planet.  Because this probability existed, we as a body acted irresponsibly by allowing the terrorists to use the LHC.

And he would have been correct – had there been an actual threat.  But there was not a threat.  While the ability of the LHC to generate mini-black holes would offer tantalizing evidence for the existence of parallel universes, the Collider still hasn’t produced them and doesn’t seem likely to be able to.  If you are ever concerned about whether the LHC has destroyed the Earth, you can get a definitive answer from here (although the answer
has consistently been no).

I wasn’t terribly concerned that in our fictional crisis the terrorists blew up the LHC and killed dozens of hostages following an ineffectual French response.  I was concerned that this lawyer, ostensibly trained in how to appraise and critically evaluate evidence, was unable to distinguish overwhelming scientific consensus from the ravings of a few fringe individuals with no actual  training in particle physics (or any physics really).  These individuals brought cases before courts in Europe and the United States to stop the LHC from turning on.  Actual lawyers had to decide whether the LHC was safe or not, and I was not convinced that they would always make the scientifically sound choice.  I concluded that a lawyer is more likely to end up being a lot more influential in the policy process then all those scientists.  This lesson, that policy is often made by people without scientific training, was the troubling lesson I took away from my time in model UN.  I was so troubled that I changed career paths from traditional engineering to one where I could bring my technical knowledge to bear on policy decisions.

Actually, we built it to further our understanding of particle physics.

This random law student isn’t the only person to struggle in evaluating scientific evidence about risk; real lawyers, politicians, and everyday people do as well – with serious implications for public policy.  People are really bad at evaluating the risks that permeate our lives, especially when the underlying mechanism is complicated and the outcome is catastrophic.  Yet we are constantly surrounded by nebulous risks, and public understanding of them is important for coming to good decisions.  We have to make decisions about the damages to the climate and our health from greenhouse gases and second-hand smoke in the air we breathe.  We have to assess the value and safety of the genetically modified organisms and organic foods we eat.  We have to think about the risks and the benefits of the fluoridation and reuse of our water.  Our high school science classes have left many of us, including our policymakers, woefully unprepared to understand the science behind the risks.  In the worst examples, the public is blatantly lied to by disreputable scientists seeking to create a controversy, who then bully the honest scientists out of their manufactured debate.

Engineers and scientists have an obligation to our profession and to the society that puts its faith in us to inform public discourse over science and risk.  This doesn’t mean we all need to stop what we’re doing and go for a Ph.D. in Engineering and Public Policy like I did.  But society invests in scientists and engineers, by funding our education and our research.  They do so not just because science is freaking cool, but because they need us to study these complex risks to help society make better decisions.  We scientists don’t need to spend our lives on a soapbox for our science, but if we see something, we have an obligation to say something.  If we see someone with a question or spreading misinformation, we need to be willing to stand up and speak for our science.  If we don’t do it, someone else will – be it climate denialists or policymakers who never took science past freshman biology.