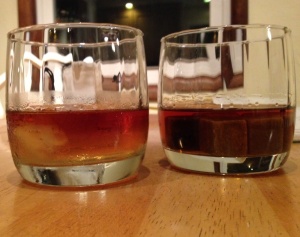 One glass of Knob Creek (on the right) with ice, one glass (on the left) with whiskey stones.

Last December, a friend gave me an early Christmas present. The package was a perfect cube, and hefty as a rock. “Whiskey stones!” I exclaimed after tearing off the wrapping paper, and promptly gave my friend a hug.

A week later, I was exchanging gifts with my undergrad friends over our annual Christmas brunch. One friend passed me a heavy gift bag. At the bottom of an assemblage of tissue paper sat a cubed box of whiskey stones. “Oh no,” bellowed a third friend, “I got Djuna whiskey stones too!”

My friends know me well.

Whiskey stones are marketed to fellow drinkers, who have indulged in the vice long enough to prefer the burn of whiskey straight. Whereas ice, the traditional cooling agent, melts and dilutes your cocktail, whiskey stones will chill your beverage without watering it down. Although 3 sets of whiskey stones would require an imbibing of alcohol excessive even for me, one box claimed that whiskey stones could also be used to cool coffee and tea for iced beverages.

Delighted by my new alcohol accessory acquisition, I immediately began adding whiskey stones to every beverage best served cold. I had grand plans of a new life enjoying undiluted tastes, secretly laughing while others unknowingly sipped cooled drinks with a weakened flavor. How disappointing it was when, after a few weeks, I swore I would never use my plethora of whiskey stones again. This was not due to any resolution to quit drinking caffeinated beverages or whiskey (you wish, Mom). Rather, it was simply thermodynamics.

I designed a simple experiment to demonstrate the thermodynamic flaw in whiskey stones. I poured two glasses of whiskey, three shots each of Knob Creek rye. One glass was cooled by ice cubes, the other by whiskey stones. Two ice cubes displaced the same whiskey volume as five stones, demonstrating equal volume.

Take a look at the measurements in the graph. Notice that the whiskey with the ice stayed at a constant 4 °C until all of the ice had melted. That is the secret cooling weapon of the ice: a phase change. The melting of the ice is a powerful cooling mechanism in itself.

In fact, we can calculate just how superior the cooling power of ice is (see “Show me the math” for the equations). The energy required to raise one gram of ice to room temperature is 480 joules. And three quarters of that energy is solely devoted toward melting the ice. Melting is one hell of an energetic process.

Whiskey stones are made of soapstones, a talc-schist that is hard enough to be durable, and soft enough to be carved. It is often used in fireplaces, since it can quickly absorb heat and it’s so darn good looking.

But whiskey stones don’t have that melting-phase change ace in the hole. All it takes is a measly 44 joules to raise one-gram of whiskey stones (fresh out of the freezer) to room temperature. Pathetic.

So it ends, with the whiskey stones only cooling my liquor to slightly below room temperature, while ice keeps my liquor frosty for a full hour.

And if the whiskey stones barely cooled a liquor that started at room temperature, it would be totally useless for a hot caffeinated beverage. When I dropped a handful of whiskey stones in a hot cup of coffee, instead of iced coffee, I got a sad, tepid drink.

Do not despair, though, for the hard-working American whiskey stone manufacturers. Despite crafting a thermodynamically flawed product, the industry remains triumphant. They spin their flaw as their greatest strength: they claim that when a fine liquor is too cool, the aromatic notes cannot be fully enjoyed.

Show Me the Math!

Whiskey stones rely entirely on their specific heat. The equation below will calculate the amount of energy needed to raise the whiskey stones from -20 °C to 25 °C.

A strong showing for the ice, a sad performance for the whiskey stones.

3 thoughts on “Cool Your Liquor”