In 2004, Albert Pujols was considered one of the best baseball hitters in the world, leading the Major Leagues the previous year with a .359 batting average. Jennie Finch was considered the world’s best softball pitcher, leading the U.S. to a Gold Medal in the Olympics by striking out more than one hitter per inning and giving up 0 runs. So when Finch challenged Pujols to a matchup, it was billed as a classic showdown of men vs. women. But that was just on the surface. Deep down, this matchup also provided the perfect experiment to test the limits of a human’s reaction time – and how our brains make it possible to surpass them.

Hitting a baseball traveling at 100 mph is often considered one of the most difficult tasks in all of sports. After all, if you hit the ball only 30% of the time, baseball teams will pay you millions of dollars to play for them. Pitches traveling at 100 mph take just 400 ms to travel from the pitcher to the hitter. Since the typical reaction time is 200 ms, and it takes 100 ms to swing the bat, this leaves just 100 ms of observation time on which the hitter can base his swing. 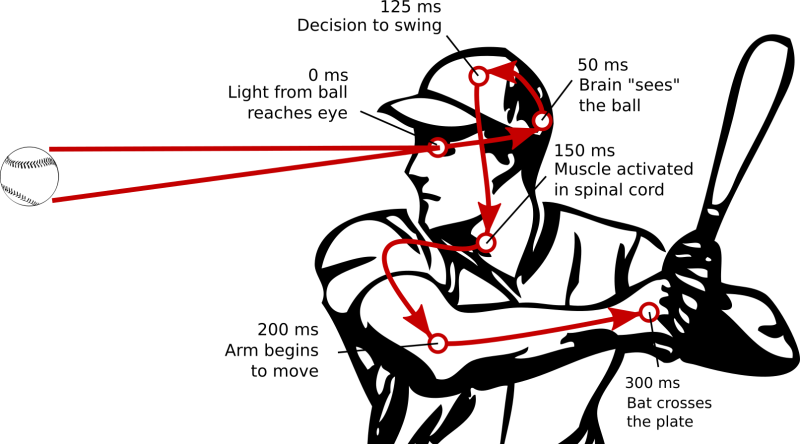 It takes at least 300 ms for a baseball hitter to see the ball and react to swing the bat. During this time, the brain has to process the image, decide to swing, and then contract the muscles to actually move the bat across the plate.

If reacting that fast sounds superhuman, it is; if reaction time were all there was to it, batters would never get a hit. To work around their slow reactions, humans have developed a three-layer mental strategy, and all three layers are perfectly highlighted by the Pujols vs. Finch matchup.

Before diving into the details of reacting to a 100 mph baseball thrown from 60 feet away, it’s useful to consider a simpler example. Instead of the pitcher’s mound, imagine a ball thrown at 100 mph from 10 times as far away. And instead of hitting the ball, imagine that the person is trying to simply get out of the way.

The extra distance gives the person more than 4 seconds to watch the ball before it gets to the plate. During those 4 seconds, layer one of his mental strategy gets to work: as the ball flies through the air, the person tracks its trajectory. The person’s brain uses this time to observe the speed and direction of the ball and extrapolate its trajectory. Long before the ball gets to the person, he simply steps aside to avoid being hit.

The key here is that the person doesn’t have to wait until the ball is right in front of him to react. He can track the recent flight of the ball, predict when and where it will end up, and effectively travel forward in time to start his reaction early.

The same is true for swinging at a pitch from the pitcher’s mound. But instead of 4 seconds, the hitter has only 100 ms to track the trajectory, calculate the speed and direction, and predict when and where the pitch will cross the plate. Pujols was a master at this, regularly sending 100 mph fastballs flying hundreds of feet into the stands.

Against Finch, though, his swings came up empty.

The critical difference? A baseball is thrown overhand, while a softball is thrown underhand. This might seem like a minor detail, but it threw a wrench in layer two of Pujol’s mental strategy, and it turns out that layer two is the most powerful.

Layer one operates the same whether the ball is a baseball or a softball: Pujols tracks the ball, calculates its speed and direction, and predicts where and when it will cross the plate. All of this relies on just 100 ms of observation time.

The power of layer two is that it can access a much longer duration of time. Pujols has watched thousands of pitches over his career, and each of those past pitches helps him predict the speed and direction of the next similar pitch. If 90 of the last 100 pitches that looked similar were traveling with a particular speed and direction, then he can draw on that distant past to give layer one a head start.

In effect, Pujols doesn’t have to spend precious time tracking the baseball’s trajectory in order to extrapolate its speed and direction. Layer two gives him the early answer to feed directly into layer one. This one-two punch makes it possible for Pujols to travel even further forward in time and start his reaction early.

But against Finch, layer two didn’t work. Pujols hadn’t faced thousands of softball pitches before. Unable to tap into layer two, Pujols just couldn’t hit Finch’s pitches. And he wasn’t the only one. Finch traveled around to face some of the best hitters in the world, putting their vaunted superhuman reactions to the test. Despite the benefits of layer one, no one came close to hitting Finch’s pitch, because their layer two was useless. That is, until someone tapped into layer three.

What ultimately defeated Finch is that she had a pattern, and that’s all that layer three needs. In baseball, a hitter gets three strikes. Finch would throw the first two balls fast. Every time it was a swing and a miss. But on the third pitch, Finch always threw a slow ball.

A slow ball, or changeup, is designed to use the second layer against the hitter. The changeup starts out looking similar to the other balls, so layer two jumps ahead and decides that it must also be going the same speed.

But the changeup isn’t going the same speed as the other balls. It’s going much slower. And even though this slower speed gives layer one more observation time to make a better decision, layer two screws everything up. The hitter thinks the ball is going faster than it is, reacts as fast as he can, and hits nothing but air, well before the pitch ever nears the plate.

Using layer two against the hitter relies on the hitter not knowing that the pitcher is throwing a changeup. But if layer three can be used to recognize the pattern, then it augments layer two. A perfect example of this is Scott Spiezio, another baseball player who faced Finch during her tour of the Major Leagues. Unlike Pujols, he was not a superstar, batting only .265 the previous season. However, he had studied Finch and used layer three to recognize her pattern. With the added observation time of a slower ball and a third layer to augment layer two, Spiezio did what mighty Pujols could not: he drove Finch’s pitch to right field for a hit.

Layer three, the final layer in a hitter’s mental strategy, recognizes a distinct pattern or signal before any explicit information about the pitch is available. By itself it’s not always useful, but it can dictate whether layer two works for or against the hitter.

If a baseball hitter had to only rely on his reaction time, then he would never hit a 100 mph fastball. His reactions are simply too slow. However, by leveraging trajectory extrapolation, snap judgment, and pattern recognition, the hitter gains precious extra milliseconds that allow him to send home runs sailing hundreds of feet into the crowd.

Although baseball players’ reactions aren’t superhuman, as they are sometimes portrayed, the reality sounds just as fictional. Their brains are simply employing a three-layer mental strategy to travel forward in time, determine when and where the ball will cross the plate, and provide precious extra milliseconds to compensate for slow reactions. The truly amazing thing is that each person’s brain is naturally equipped with this ability.

Of course, most of us can’t hit a 100 mph fastball. The best hitters spend hours watching thousands of pitches. With each pitch, the different layers in their brains get just a bit better. Maybe the reaction times of these hitters aren’t superhuman, but the focus and dedication required to train their brains enough to hit a fastball might be.