Do you remember this piece of shoddy math from when the Powerball made it to more than a billion dollars back in early 2016? 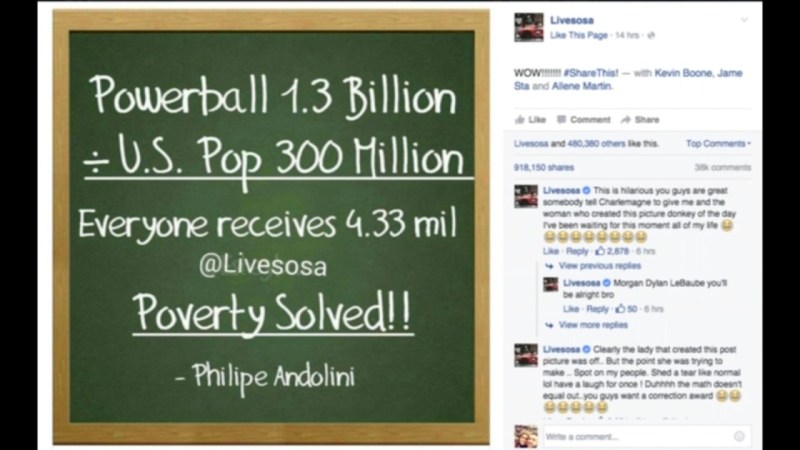 The “Philipe Andolini” behind this quote remains shrouded in mystery, with some claiming that he doesn’t even exist.  However, some sleuthing digs up a Facebook page for one Philipe Andolini, who appears to be originally from Haiti.  He now lives in New York City, and so he could even be friends with the meme’s creator.  This origin explains at least part of his famous math mistake: Haitians (and many other countries) use billion to refer to something different than what Americans mean by billion.

The users of short scale tend to be from English, Arabic or Slavic language speakers.  The users of the long scale are either from Continental Europe or their former colonies. (Modified from Wikipedia)

As is clear from the map above, Haiti is far from the only country that uses the long scale, and which scale a country uses tends to depend on their official language.  Because of this cross-language confusion, the United States government has created guidance for describing numbers larger than 999,999,999.  In its latest Guide for the Use of the International System of Units (SI), the National Institute of Standards and Technology (NIST) recommends that “they [the words billion, trillion, etc.] be avoided entirely.”

Had the states that managed the Powerball taken NIST’s advice, maybe Philipe Andolini wouldn’t have looked like such a fool with his math.  But even if he was confused about the short and long scales, that only partially excuses him.  That particular mistake would have meant that we would all have received only $4,333 – which is certainly nothing to sneeze at, but still far short of the $4.33 million he promised.

What none of this explains is why the original billion dollar meme took off on social media.  Americans don’t use the long scale, so they should have been able to catch that Philipe’s math was terribly inaccurate.  Fortunately, much of the profits from state lotteries (like the Powerball) go to K-12 education.  From the looks of it, our math instruction could use all the help it can get.