Robots that Ride the Elevator

Your boss tells you to deliver a package from your building’s first floor up to the fifth floor. You pick up the package from the receptionist, and to save time, take the elevator. You then press a button to call the elevator, squeeze in with other riders, push the fifth floor button, and hand the package over in no time. But would this be as easy if you were a robot?

“Courier robots” that securely and inexpensively deliver parcels are gaining popularity. Elevators are much safer than stairs, but some tasks involved in using an elevator that are easy for most people can be challenging for a robot.

This robot is too short to reach the elevator buttons 🙁

The first challenge robots have is calling the elevator. Many robots (like a Roomba) either don’t have arms or are too short to reach the elevator buttons. You might think this has an easy solution: elevators and robots are both machines, so can’t they talk to each other? But to communicate wirelessly, the elevator and the robot need to be connected to the internet. Increasing building automation has led to newer buildings with internet connected utilities, including elevators. Still, many buildings with elevators have been around for decades longer than the internet has. For instance, in New York City there are elevators still in use that were built as early as 1925, even if they have been refurbished since their original installation. Elevators constructed before the information age would need to be retrofitted with a wireless interface as part of an expensive building renovation. The CTO of Vecna Robotics, a company that makes delivery robots for hospitals, noted:

“The biggest obstacle to the adoption of our robots, or really any robots right now in buildings, is, what I broadly classify as, building integration. The robots need to be able to use the same elevators, the same doors and the same security systems as human users in those environments.”

Perhaps, then, the robot should be bigger or have an extra arm, just to press the buttons on the elevator and operate it like a person.

Even if the robot is capable of reaching and pressing elevator buttons, it can still be difficult to decide which to press. Elevator buttons come in all sorts of varieties, and can be labelled poorly, requiring either knowledge of the building or some assumptions made about each buttons’ meaning. One solution that researchers have considered is to let the robot vision system learn which buttons to press, but even that depends on having well-designed button panels.

Difficult elevator buttons. Even humans with graduate degrees in engineering can’t easily tell what each button does. Left: A panel from a hospital in Atlanta. Right: a panel from a brand new building I visit often at Carnegie Mellon.

Alternatively, a robot can operate an elevator by asking a person for help. Of course, this requires there be friendly people nearby. If none are, then the robot would have to decide whether to go find a person nearby to ask, or to wait.

Once inside an elevator, the robot has to be safe to interact with, or it could become a liability for its owners. But even then, the robot might also need to consider the cultural norms of fellow passengers. For example, it is common courtesy to move out of the way for people getting in and out of the elevator, and to give priority to people getting off earlier. Occupants might also expect some personal space between the robot and person, and the amount of personal space preferred could change based on the culture, size of the space, and number of passengers. If the elevator is too small to fit both a person and the robot, then the robot would have to decide if it should get out and give the person priority. A solution used by some hospitals is to only allow robots to use empty elevators, or ask riders not to get in the elevator with the robot. Then, the robot may have to wait a long time to get an empty elevator if the hospital is busy. Another option is to give the robots dedicated elevators, but this is not possible in all buildings.

Coming Soon to an Elevator Near You 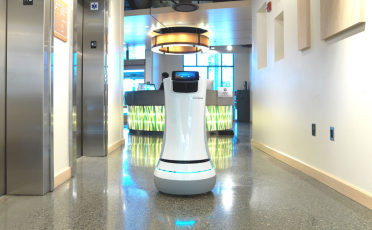 Aethon Robotics’ “Tug” takes the elevator in a hospital.

Even with these challenges, robot are starting to show up in elevators. For instance, the company Savioke Robotics has begun to integrate robots into hotels. The robots take the elevator from the front desk and navigate to the guest’s room to deliver small items like towels or room service. Aethon Robotics makes robots that navigate around hospitals, and take the elevator to deliver clinical equipment, meals, or medication between floors. These robots can reduce the need for menial labor, so that nurses can focus on more important work, allowing them to spend more time with patients. With these benefits, after taking the elevator up to the top of the building, it’s no wonder these robots are programmed to feel uplifted!

4 thoughts on “Robots that Ride the Elevator”