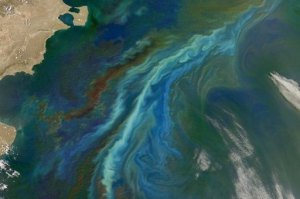 Photo of iron sulfate dumping off the coast of Canada from http://phys.org/news/2012-10-canadian-knew-sea-fertilizing.html

In the summer of 2012, scientist and entrepreneur Russ George sailed purposefully past the coast of Vancouver to the archipelago of Haida Gwaii. There, he proceeded to dump 100 tons of iron sulfate into 10,000 square miles of ocean.

The Haida Indians had given him their blessing. George was the director of the Haida Salmon Restoration Corporation, and the Haida Indians were told that this iron would fertilize the plankton, a valuable feedstock for the native salmon. But George’s intentions went beyond fish farming: adding iron would allow swarms of plankton to blossom, which would draw down massive amounts of carbon dioxide. Russ George claimed to have found a solution for amending the starving salmon population and mitigating the rising concentration of greenhouse gases in one fell swoop.

Most experts, however, were infuriated.

Since then, George has become an infamous case of the dangerous line between ingenuity and recklessness. Supporters argue that such drastic measures may be needed in the future unless we somehow reduce our greenhouse gas emission. But most scientists and policymakers argue that his hasty deed had no scientific merit, and could cause irreversible damage to the ocean environment.

How could an experiment with such good intentions have gone so wrong?
END_OF_DOCUMENT_TOKEN_TO_BE_REPLACED

Global warming from a chilly scientist

“Global warming, my gluteus maximus,” Alaska Gov. Sarah Palin blasted on Facebook, alongside a picture of a snowy landscape taken in May, 2013. Although I am a scientist who understands and accepts the occurrence of global warming, the wearied look of my beaten down coat and the regularity of my water pipes freezing in April leaves such skepticism as no surprise. In five words, the politician captured a common perception of the much-discussed phenomenon of global warming.