Physics is full of outlandish scenarios where our basic intuitions break down. Quantum mechanics, relativity, nanoparticles…so many phenomena seem counter-intuitive, or even impossible, that it’s almost not surprising when we hear of another in some remote domain. But sometimes, physics surprises can be found right in our hands.

My favorite counter-intuitive motion can be demonstrated with an object that you likely have near you right now: a smartphone. To see it, hold your phone with the screen facing towards you and give it a light toss into the air, spinning it so the screen stays facing towards you. Make sure that if you drop it, it falls in your lap or somewhere soft.* Watch how the phone rotates in the air. END_OF_DOCUMENT_TOKEN_TO_BE_REPLACED

The experiment that taught us what “left” really means 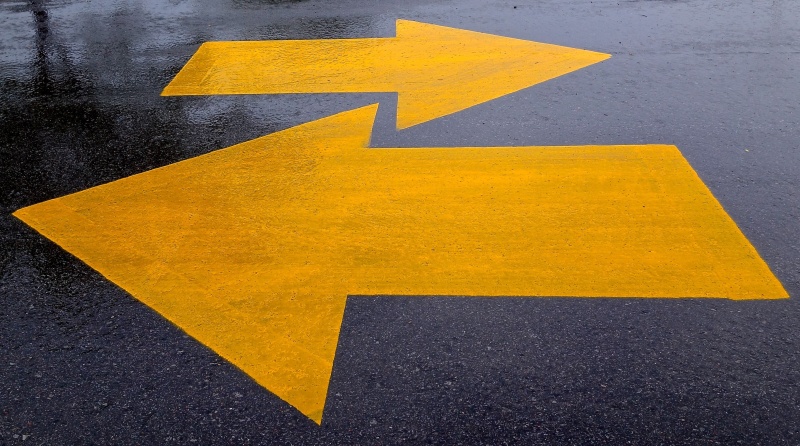 Do the laws of physics know their left from their right? (Image adapted from Dean Hochman)

Can you tell your left from your right?

When I was three years old, I took significant pride in the fact that I could – particularly the day I discovered that many of my fellow preschoolers had not yet achieved this feat. Of course, as the years wore on and my classmates got the hang of it, I came to take the distinction for granted. It was so…pedestrian. Trivial, even.

And then a college professor showed up and left me so confused about left and right that I couldn’t fathom how anyone could rightly know which was which. END_OF_DOCUMENT_TOKEN_TO_BE_REPLACED

Brain Power on the Baseball Field 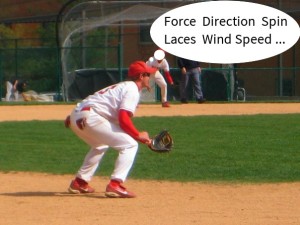 I was sitting in my college dorm room, working on some engineering homework, but I just couldn’t focus. My mind kept wandering back to the game. How could I have played so poorly? My teammates must hate me. Did I cost us a chance at the playoffs?

In college I played on the varsity baseball team and studied mechanical engineering. I worked hard on the practice team for 2 years and finally got my shot to start at third base as a junior. But things weren’t going according to plan. Third base has a long throw across the infield to first base, and I was having trouble making the throw accurately. By itself, this wasn’t unusual; every player goes through his funks and eventually works out of it. But despite hours of extra practice, I was stuck in a rut. My frustration culminated in a game in which I committed 4 throwing errors and we lost to an important division opponent by 1 run. My teammates had battled tooth and nail to make it a close game, and I literally threw it all away.

END_OF_DOCUMENT_TOKEN_TO_BE_REPLACED

It’s World Cup time, and around the world football and soccer fans are lining up to complain about how stupid the word “soccer” is. 31 of the world’s best footballing nations (and England) came to Brazil for a chance at glory and honor in the world’s favorite pastime. While many of the people in the U.S.A. may have only watched by accident, chances are good that you saw something remarkable this year. No, it’s not the US watching soccer once the cup’s over – that has no chance of happening. Take a look at this free kick (I humbly suggest muting the video and watching the first 45 seconds):

END_OF_DOCUMENT_TOKEN_TO_BE_REPLACED

The Cosmos’ Attack on Computers

In 1984, IBM encountered a mystery: computers in Denver were making ten times more unexplained mistakes than the national average. The operators of the computers kept reporting memory errors, but whenever they sent a memory unit back to IBM, the company could find nothing physically wrong. Why wouldn’t computers work properly in Denver?

For several years, the operators had to work around the fact that their computers would occasionally just forget things. It was almost like the computers were high – which, it turned out, was precisely the problem. At 5,280 feet, computers in Denver are much more susceptible to an unlikely culprit: cosmic rays. END_OF_DOCUMENT_TOKEN_TO_BE_REPLACED

The Unreasonable Effectiveness of Science

Or Why Effective Theories are so … Effective

Solids, liquids, gases.  What do these words really mean?  How about cell, organ, or human?  At a fundamental level, these things are complex assemblages of interacting subatomic particles.  But you probably have an easy time recognizing a human without knowing about their electron configurations; you might instead identify key characteristics like physical appearance or behavior.  These various abstractions help us understand the macro-world, but a seemingly naive philosophical question is “why can we do that?” END_OF_DOCUMENT_TOKEN_TO_BE_REPLACED

The Science of Disappearing

Ever since ancient Greece, man has been enticed with the idea of being invisible. Our stories offer different paths to achieve this invisibility – for example, Plato’s shepherd became the King of Lydia with the help of a ring which makes the wearer invisible, and H.G. Wells’ The Invisible man becomes so by drinking a formula he invents.

The popularity of Harry Potter, however, has caused this power to take the form of a cloak in our imaginations. How simple it would be to cover ourselves with a piece of cloth that makes us invisible! Every time you are put in the spotlight against your wishes, made to answer an awkward question or want to be undisturbed, you just slip a cloak over yourself and you’re invisible!

Now our governments are apparently willing to spend money on making this crazy dream come true. Different research groups around the world have come up with different ideas to make this a reality. Though they are all in incipient stages, there seems to be a lot of potential in these ideas. Now we look at a few of these brilliantly crazy ideas. END_OF_DOCUMENT_TOKEN_TO_BE_REPLACED